Will Pavlov’s Dog and Schrödinger’s Cat Get Along?

Until about a century ago, classical physics, namely Newtonian physics, was largely sufficient for us to understand the universe.

In other words, for about 300 years, there was neither a problem nor the cat in question.

Yes, we were solving macroscopic events below the speed of light with Newton’s laws of motion for many years. So much so that these laws were almost admirably secure with the precision of the calculations. In other words, belief in God was replaced by science by scientists at that time. It is like a world where it is known that the positions of the planets will take thousands of years, when the sun and moon will be eclipsed, how many meters later a vehicle on the road will stop with the effect of friction, and energy will always be conserved…

In fact, Newton’s law of action and reaction could even underpin most of our psychological behaviors.

The dog’s reaction to this effect was that after each bell, the dog’s mouth began to water.

All was well with the principle of causality, in which cause and effect are interconnected. Everything that needed to be found was found by scientists, studies were almost over, physics was over.

In such a universe where everything could be predicted and predicted, there was no need for an unknown power like God.

A deterministic world where everything can be predicted, observable, measurable, and no surprises…

Until Einstein’s principle of relativity.

So this meant, in Einstein’s words:

Because Einstein’s theory of relativity was taking the place of classical physics in objects moving at the speed of light.

A perspective that explains the wobble in Mercury’s orbit, where time is affected by velocity and mass.

Even to give a more familiar example, when we put balls of different weights on a flexible fabric, the one with more mass will stretch the fabric more. The effect of abstract gravity on the bending of space-time.

Of course, the scientific community had embraced Newtonian physics so much that many did not accept this idea for a long time.

At the beginning of the 20th century, classical physics was again insufficient in subatomic dimension, and scientists started to search for new ones.

A universe in which probabilities, uncertainties, a precise and sharp point of view are not possible and the causality principle has collapsed, enabling us to better understand the structure and functioning of DNA, the stability of atoms, the properties of superconductors and fluids, chemical bonds, and where “God is not dead”…

It was in this universe that Schrödinger’s cat appeared. Shall we remember the experiment? 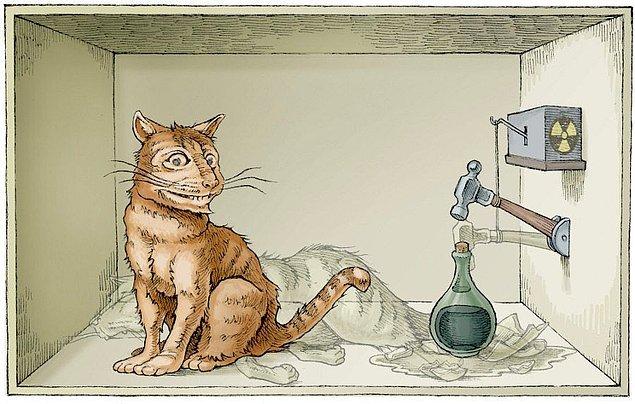 In this experiment of Schrodinger; was putting a cat in a sealed box with a vial of poison and a radioactive source. The probability that this radioactive material would glow within an hour was equal to the probability that it would not. If the sensor inside detected radioactive radiation, the mechanism that broke the vial would work and the poison released into the environment would kill the cat. According to superposition, after one hour, the probability of the cat inside the box being alive or dead was equal. So until the box was opened, the possibilities were dominant. In the double slit experiment, when there is no observer, light behaves like a wave function. But when the box was opened and observed, one of these situations would come true.

With the influence of the observer, the probabilities, that is, the wave function, would collapse, that is, the superposition would disappear, and the probability would decrease to one. Again, as we remember from the double slit experiment, this was a reality where light behaved like a particle under the influence of the observer, and there were no possibilities.

Well, do you think this dog and cat from different worlds can get along?

In other words, will the “Theory of everything” that combines classical physics and quantum mechanics and connects all known physics phenomena be found?