“So the soul has a power that can affect matter.”

Joseph B. Rhine, who was the first person to introduce the statistical method into parapsychology, made a serious contribution to psychic studies with his studies and experiments for many years, and finally came to this conclusion.

So, does spirit or thought really affect matter?

Can our thoughts guide our lives?

In fact, with a little experiment, I can prove to you right now that thought affects matter.

What will I tell you now…

Let’s imagine a juicy sour lemon. And imagine first giving it a good squeeze and then drinking it.

Your mouth is watering, isn’t it?

So, by activating your salivary glands with my words and thoughts, I influenced you from afar.

Okay, although I think the example I gave is appropriate, let’s move on to these three scientific studies that I promised in the light of scientific data without diluting the work.

The first is from the field of telekinesis.

I know this field is very open to abuse and there are many dishonest people. But the example I will give is extremely striking. In fact, the study was published in Nature, one of the top scientific journals.

Our hero is Uri Geller.

It is a living example of psychokinetic power, that is, the mind’s power to directly affect matter!

It is known for events such as stopping working clocks from metal bending or starting broken clocks. His talent is different from the tricks and simple illusions of other people on television. Their work is an extremely unusual event that must be dealt with scientifically.

But as you know, science wants observed events to be often repeatable and measurable. In other words, the fact that a goat can talk like a human is not enough for scientists to accept that goats can talk. He expects other goats to be able to speak the same way…

Fortunately, this psychokinetic phenomenon is not limited to Uri Geller. So he’s just one of the talking goats. Because Uri was scientifically studied for a long time by two physicists in the 1970s, and it was proved that there was no deception or dishonesty involved, and that the effect of extrasensory perception and intention on matter was real, thanks to him. In fact, the result of these researches was published in the famous science journal Nature after a while, as I mentioned above.

Uri Geller has proven that under experimental conditions, metals such as chromium-vannadium deform from afar and give movement.

Let’s explain the situation with an example:

1% vannadium added to chromium is 50 times harder than iron. Because of this hardness, it is used in the construction of the wrench. Geller was able to bend a 19.4 cm long wrench 6 degrees in the presence of observers with just the power of thought. A temperature of 800 degrees is required to make this bending. So we’re talking about an extremely high energy.

As it is known, memory metals cannot be bent and when bent, they return to their previous state. Geller was able to bend the nitinol, a memory metal wire, to prevent it from returning to its original shape permanently.

Now let’s come to the effect of the power of thought on water molecules. 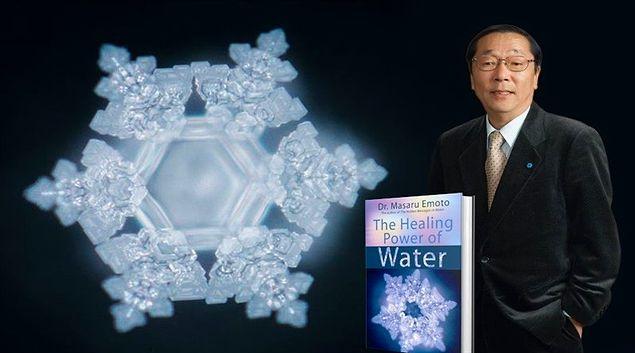 Our hero is the Japanese scientist Masaru Emoto.

There is no one who has not heard the name of the Japanese scientist Masaru Emoto. Hani had done some experiments on water crystals. In this experiment, he studied the molecular structures of water crystals with a microscope and in a very cold room. Of course, some of them had said good words to water with good intentions, while others had said negative words such as war and hatred with bad intentions. In addition, he reflected different kinds of music and different emotions on the water. Water crystals with nice words formed an orderly and extremely symmetrical shape just like snowflakes, while water crystals with bad words were observed in a highly asymmetrical, low-energy and disconnected form.

Later, the scientist, who continued to work on tears, determined that tears shed with anger and ambition again became amorphous and irregular, and tears that flowed with gratitude and love were symmetrical and high-energy.

Although these studies are not accepted by some authorities, there are other observations showing that the energy and crystalline structure of water varies according to ambient conditions. Since I limit my writing to three items, I do not elaborate on those parts. If you are curious, write in the comments. I also write about this topic.

Let’s move on to the most surprising last example.

This time our hero is photons.

Some may have guessed what I’m talking about.

Yes, the famous double-slit experiment. In other words, the effect of the observer on the choice of light.

To give a brief summary without going into the details of the experiment, we call it the wave-particle dilemma. The massless photons that make up the light behave like particles as they pass through the double slit if an observer is present. But if there is no observer or detector measuring it, it behaves like a wave function and the traces behind the slit differ accordingly. You can find more detailed information about this experiment in my other articles.

It is interesting, is not it!

We can no longer distinguish between physics and metaphysics, spirit and matter, matter and meaning, with sharp lines. In fact, it was always like that, but we just realized it.

So let’s end my article with the words of the famous physicist Michael:

“If even a single straw is moved by mental force, we need to change our view and understanding of the universe.”