Teleported to the Past Interviewed with Nikola Tesla

Nikola Tesla is the idol of most of us, especially Elon Musk, whose name has not been forgotten over the years, who made an impact all over the world with his inventions such as alternating current generators and motors, MRI, laser technology, robot technology, earthquake machine.

I came to you by teleporting from the year 2022.

And I would like to begin my speech by expressing my gratitude to you. You have proved to future generations that you are a scientist far ahead of your time by laying the foundations for many ingenious ideas from wireless energy to alternating current. In your life full of difficulties, you have become one of the most successful names in the world, despite many traumas and the idea thieves who stole your work.

“The future will show the truth and everyone will be judged by their work. Let today be theirs, the future is mine.” I said. It’s good to hear that I was right.

Definitely. You were right on this one, as in many other things.

Also, “It doesn’t matter if they steal my idea… The important thing is that they don’t have their own opinion.” you said.

A very rare perspective. That thought would suit you too.

– Dear Nikola Tesla, you have shed light on the future with your words and thoughts. What was the golden rule of being so successful?

“I was obsessed with finishing what I started. He had once begun to read Voltaire’s works, and was intimidated to learn that that monster had a corpus of nearly a hundred books in small print, which he wrote over seventy-two cups of black coffee throughout the day. They would have to be read, but when I finished the last book and put it on the table, he was very pleased and never again! I said.”

“Many days passed without knowing how I was going to eat the next day. However, I was not afraid of working. In fact, I once went to the workers who were digging wells and said that I wanted to work. Their bosses looked at my beautiful dresses and white dresses and laughed at me along with the workers. But then he said, “Well, spit in your palms and pick up the pickaxe.” I worked harder than anyone else that day and at the end of the day I had $2.”

“If the talent in a person’s nature turns into passion, no power can stop that person.”

“When natural inclinations turn into a strong desire, a person moves towards his goal in winged boots.”

– You emphasized the importance of perseverance, determination and passion. So, were you a hard worker?

“My working style is different. I don’t get to work right away. When I have an idea, I process it thoroughly in my imagination. I examine its structure and elements thoroughly in my mind and change it.”

– Imagination is also important. Well, is every genius a little crazy?

“You have to be sane to think and pretty crazy to meditate.”

– During your lifetime, many people around you were not open to the ideas you put forward. You have failed like many people. How did you overcome them?
“A mass in motion will resist being diverted. Likewise, the world opposes new ideas. It takes time to realize the importance and value of the idea.”

“Successes and failures are inseparable, just like matter and force.”

“Even if we fail, our efforts are not in vain…”

“Every day we go to work with the hope of discovering – whoever it is, that someone will find a solution to our ongoing problems – and the next day we go back to work with enthusiasm; Even if we fail, our efforts are not in vain, because we have enjoyed these efforts for hours and hours and used our energies for the benefit of humanity.”

– Most of your predictions about the future turned out to be correct. For example, “Very soon, it will be so easy to transmit messages wirelessly to all over the world; everyone will be able to carry and operate their own device. My belief is so strong…” and “In the twenty-first century, robots will replace the slaves of ancient civilizations.” you said. How did you guess all this?

“My brain is just a receptor. There is an essence in the universe from which we derive knowledge, power, and inspiration. I have not penetrated the secrets of this essence, but I know it exists.”

– Mr. Tesla, were you a successful student as a child?

“I had a weak character until I was 8 years old. I had neither the courage nor the strength to do anything. I was living on the edge emotionally. For years I feared life, death and religion. Then suddenly I was freed from all my fears.”

– You earned a lot of money thanks to your patents, but you still had financial difficulties all your life, why?

“What money means to others means nothing to me. I invested all my money in my experiments, where I made inventions that would make human life easier.”

– Let’s get to those mysterious numbers. Why do you think the numbers 3, 6 and 9 are so important?

“If you knew the grandeur of the numbers three, six and nine, you could obtain the key to the universe.”

“I would sacrifice a thousand secrets of nature that I accidentally stumbled upon, for the sake of the one secret that I had plucked from nature’s hand, despite all the difficulties, at the risk of risking my life.”

-I am very curious about the mystery of these numbers. Do you have any other predictions for the future?

“Creating and destroying matter and bringing it together in the forms it wishes will be the greatest victory of humanity.”

“On the way to infinity, all the forces are in perfect harmony. Therefore, the energy of a single thought can determine the motion of the universe.”

“The days are not far away when humanity will make the planet that gives it life vibrate with its voice and go beyond the borders of this world with its intelligence and power. “

“Generations later, our machines will run on energy from any point in the universe.”

“If science begins to be made about a non-physical phenomenon, more progress will be made in 10 years than in all the centuries.”

– Well, we like mysteries. Would you please give us a little more of your secrets?

“If you want to learn the secrets of the universe; Think in terms of energy, frequency, and vibration.”

– While we couldn’t save ourselves from epidemics in the century I came, we are on the verge of the 3rd World War. What would you like to say to those whose ambitions are inexhaustible?

“If your hatred could be turned into electricity, it would be enough to light up the whole world.”

“Peace can only come as a natural result of universal enlightenment and coming together of nations; we are still a long way from this peaceful reality.”

“As long as people continue their brutal acts of killing each other, progress is blocked.”

“The individual is unimportant, races and nations come and go. Only humanity is stable.”

– Why do you think humanity fell short of humanity?

“We are always hungry for new excitements, but soon we take them for granted and become indifferent. Yesterday’s miracles are today’s ordinary events.”

“Many people are so caught up in the course of the outside world that they are completely unaware of what is going on inside them.”

– Who did you love most in life, if it wasn’t too special? 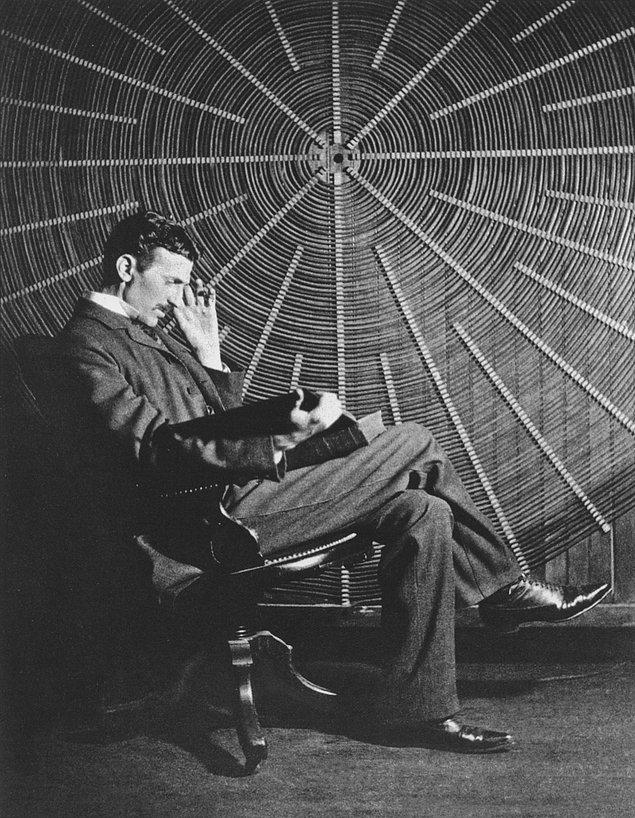 “I loved books the most in life.”

– I did not expect this answer. I guess you liked solitude?
“Be alone. The secret of discovery is being alone. Only when you are alone can you find new ideas.”

“You can’t count so many great inventions invented by married men.”

– Is that why you didn’t think about marriage?

“Inventors don’t have time to get married.”

– The word “invention” is very common among us. Joking aside, what would you like to tell us as someone who has patented so many inventions?

“Invention is the most important product of the creative human brain. The main aim is the mastery of the mind on the material world in accordance with human nature and needs.”

“The basic condition for human progress is invention.”

– As a physicist, my idol is Einstein and you. So, who was your idol?

“My idol was Archimedes. I also admired the work of the artists. But they were just a shadow to me. The inventor produces something new, tangible and usable for the world.”

– It is undeniable that you are an extraordinary person. What if I asked you to describe the elements that separate you from us in a few sentences?

“We are all single. Egos, beliefs and fears separate us.”

“I have a feeling that I think I will be the first to hear the message from another planet.”

“I am part of the light. Light activates all my 6 senses. I see it, I hear it, I smell it, I touch it, I think about it. Thinking about it is also the sixth sense.”

“The desire that guides me in all that I do is the desire to put the forces of nature at the disposal of humanity.”

“When I look back on the past, I see how quietly the events that influenced our destiny happened.”

– Finally, what message would you like to give to humanity?
“Dear Human;

Humanity will make the planet that gives it life vibrate with its voice, become the master of the sun, use the inexhaustible and intense energy of microcosmic movement, combine atoms into predetermined forms, create lakes and rivers in different parts of the world by removing the ocean from its bed and carrying it by air, commanding the wild elements, with its intelligence and power. The days when he will go beyond the limits of this world are not far away. ”

Thank you very much for this very special interview for me.