Los Angeles is one of the cities that work and travel participants should not visit without seeing. We have searched for you the places you need to know and see about Los Angeles, one of the most famous cities in the world.

DOWNTOWN LA: As you have in mind, downtown is surrounded by highways. The Hollywood Highway is to the north, the Harbor Highway to the west, the Santa Monica Highway to the south, and other freeways are located between the LA River and the eastern portion of LA2.

Consisting of eight blocks in the East-West direction, the Civic Center is America’s largest government building after Washington, DC. The building houses all LA-related federal offices and the U.S. Federal Court. The building is where the O.J Simpson trial was held in 1995. The building was also used as the ‘Daily Planet’ in the ‘Superman’ series. In addition, the LA Children’s Museum in this vicinity is also an important building.

A few blocks from the Civic Center is ‘El Pueblo de Los Angeles’. This is a historical park covering an area of ​​18 hectares. The park also contains buildings built by the first people who came here in 1781. The most interesting place in the park is Olvera Street, which was restored in 1930. Here
(In Olvera) you can find many shops (especially Mexican ones) to shop.

Right across from El Pueblo is Union Station. This is one of the architectural treasures of Los Angeles. It was built by the Spanish in 1939 and bears traces of both Arab and modern art. If you’re not on a train, this is a place worth stopping by. A few blocks north from here is Chinatown. Chinatown forms the cultural core of the 200,000 Chinese living in LA. Here you can find typical Chinese porcelain, Chinese restaurants, shops selling silk dresses and of course people doing acupuncture.

To the southeast of the Civic Center is Little Tokyo (Mini Tokyo). This place was established by the Japanese who came to LA in the 1880s. Little Tokyo is a cultural hub for the nearly quarter-million Japanese living in LA. Here you can find Japanese sushi restaurants, Japanese gardens and shopping malls. You can also see the Japanese-American National Museum, housed in a historic Buddhist temple.

To the southwest of the Civic Center is the Museum of Modern Art. The museum was designed by Japanese architect Arata Isozaki. Here you can find the world’s most famous collections of paintings, sculptures and special photographs taken from 1940 to the present. Westin Bonaventure Hotel is located to the west of MOCA (Museum of Modern Art). The glass towers in the hotel are worth seeing.

The ‘Hispanic Shopping District’ south of the Civic Center is a place worth seeing with its cheap restaurants, wedding dresses, and Latin pop music playing. Also, the Grand Central Market between Broadway and Hill Street should be seen; because it is the oldest and largest open-air market in Los Angeles. 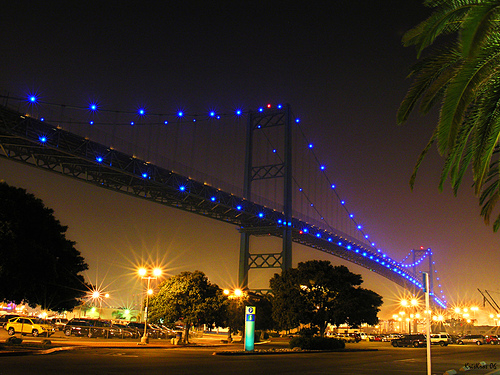 HOLLYWOOOD
LA is actually famous for its feature films. Hollywood, one of the centers of cinema, is not as much a cinema center as it used to be; however, it has many historical elements related to cinema. Walk down Hollywood Boulevard. During this time, you will see many famous places. The Chinese Theater is just one of them. You can see the traces left by 150 celebrities on this road. After passing this place, you will find yourself in another historical place at the Roosevelt Hotel, the place where the first Academy Awards were given.

The corner of Hollywood and Vine used to be very important to the film industry. You can find many historical objects from these old days in the ‘Collectors Book Store’. If you can’t meet a celebrity while in Hollywood, stop by the Hollywood Wax Museum or the ‘Frederick’s Hollywood Lingerie Museum’.

DISNEYLAND (HEART OF FUN) Is it okay to come to LA and leave without stopping by Disneyland? Of course not!! Disneyland consists of four main parts: The first part consists of a forest called Adventureland and Indiana Jones and Forbidden Eye sections can be seen. The second part, Frontierland, creates a wild west feel. The third episode, Fantasyland, features Disney’s favorite characters. The final episode, Tomorrowland, is about the future. However, Disneyland is a very crowded place. So it would be better for you to come here in the afternoon when the children are sleeping at home.

UNIVERSAL CITY
Universal City is one of LA’s largest and most entertaining parks. It also houses the Universal Studios movie studios. The studio was built in 1915 and has been open to the public since 1964. You can take a tram on the Backlot Tour and visit here and see the filmed areas. You may also have the chance to see special effects here. There are also eight restaurants here. It would be nice to visit this place and eat at one of the restaurants.

BEVERLY HILLS
Beverly Hills is a place where the rich and famous live. The region has been the venue for many TV series and movies. It’s easy to see a Mercedes on every corner here (You’d better be ready for this.). If you want to shop here (which we do not recommend at all), you can go to Rodeo Drive. Here, famous brands such as Tiffany, Armani, Vuitton sell in the most expensive race.

North Beverly Hills is the main center of luxury living. Here you can see the homes of celebrities such as Jack Nicholson, Warren Beatty and Harrison Ford. If you want to see another place that is calmer but swarming with stars, we recommend you stop by ‘Bel Air’ in the west of LA.

MALBU
Most of the beaches in LA are dirty and not that popular, but some beaches are worth a visit. Malibu is also one of Southern California’s cleanest beaches. If you want to sunbathe or swim, Malibu will be the best choice for you. Although many places in Malibu are owned by private businesses, you can be sure to find some very nice public beaches here.

SANTA MONICA
Santa Monica is one of the city’s most welcoming neighbors. ‘3rd St. The Promenade is in the heart of Santa Monica. Here you can find very good cinemas, bars, cafes. The Santa Monica Pier in the same area is also a place of interest. The dock was built between 1908 and 1921. You can find restaurants with good food on the pier, of course, they are quite filling in terms of seafood varieties.

VENICE BEACH
Venice Beach is one of the places where the density of people is high. The beach’s ‘Ocean Front Walk’ area is full of runners, acrobats, musicians, basketball players, and people obsessed with staying fit. It was just a flooded place years ago; however, a cigarette company has turned it into an entertainment area with gondola canals. Although many channels have been closed at the moment, the region still maintains its former vitality. This is a good place to shop and then sit and watch the crowds.

GETTY MUSEUM
The J. Paul Getty Museum is at the top of the museums in LA. The museum is on the Pacific Coast Highway west of Santa Monica. The original collection of the museum is housed in a villa and the value of the collection is approximately three billion dollars. The gardens inside and outside the museum attract attention with their antique objects from the Greco-Roman period. The villa was closed to the public in 1997 and will not open until 2001 ; however, the photographs in the museum can be viewed at the Getty Center in the Santa Monica Mountains.