The “Metaverse” was a hot topic among Web 3 communities in early 2021, which was spoken like a myth spread when Web 2.0 arrived years ago. After Facebook was renamed to cover itself and all its sub-branches, public interest in the subject increased irresistibly.

Today, everyone is trying to ponder this concept. And what is the Metaverse in the minds of most of us? Why is it Important? How can I be a part of it?” There are still questions that are far from being answered.

Professionals from all industries, including gaming, fashion, architecture, retail, blockchain, finance, are looking for the entry point for Metaverse and trying to position themselves, their products and brands around this new topic.

One of the most exciting aspects of Metaverse is the unprecedented opportunities it offers to bring together individuals, projects, startups and technologies from different industries to co-create something unique, innovative and creative.

We’re sure you’ve heard the term “Metaverse” a lot by now. Many of us are unintentionally a little skeptical of buzzwords, especially ethereal ones like the metaverse. However, we want to point out that, as highlighted in the Open Metaverse OS Report, narratives are powerful in mobilizing capital and economic activity, demonstrating that the Metaverse can transcend time and stand the test of time.

With the Metaverse Master Class report, you can access all the details about the concept.

We have compiled a summary of the report for you;

According to the report, Metaverse is already thought of as a process that has started from a long time ago. The defining feature of a true Metaverse; Because they are places where value can be earned, spent, borrowed or invested interchangeably, both physically and virtually, without permission, and more importantly without the need for a government or platform, it is indeed in its own currencies, rather than necessarily in a specific type of virtual experience. It is a meta-economy. 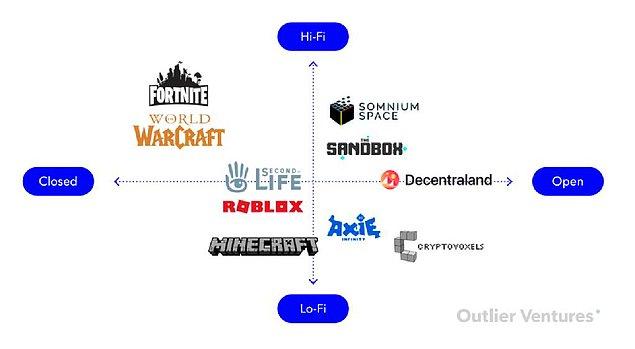 To put it simply, there are at least two versions of the Metaverse that has been observed to emerge: The first is closed platforms; They are dominated by Big Tech like Facebook / Oculus. The other is built on open protocols that leverage blockchains; Platforms such as decentralized virtual lands in Decentraland and Sandbox.

There is also another technical and philosophical distinction between Metaverse visions and emerging realities that can be described as low-fi to hi-fi. This detail is crucial when we think of it as an economic system and adopt the view that they should not only be inclusive but inclusive. However, as far as we know, it must be said that all these virtual worlds still require at least one smartphone, which currently excludes 60% of the world’s population. 🙂

The axes you see in the chart above classify emerging Metaverse platforms and virtual worlds as an outline. These two axes are believed to be the most important to consider, according to the report, because junctions represent the cost of entering the economic system and the ability to offset that cost by gaining value across as wide a demographic as possible. It is thought that whether the platform allows user-generated content or not can be added as a third classification, but this difference will disappear over time.

Web 3: An ideal port for the Metaverse!
This paradigm is based on blockchains and their atomic units of account becoming the global digital settlement layer, meaning that value as a form of wealth is “minted,” created, stored, or transferred between other technologies. But digital wealth can be programmable and represent an increasingly complex spectrum of assets, from in-game items to virtual lands, loan deals or futures contracts. It represents an entirely new financial system, often referred to as DeFi (Decentralized Finance), consisting of currencies, swaps, borrowing and lending.

We can think of all these convergent technologies as a combination of both a new financial system and an Open Metaverse Operating System developed for a more open Metaverse, standing between hardware, software and the user. Because of its open source features, anything born on the blockchain can be transferred and its metadata can be seen. And so the DNA of virtual worlds built on it is passed on or inherited, in whole or in part. And looking at the broader picture, anything that goes through this crypto-backed financial system can collectively be considered Metaverse GDP (Gross Domestic Product), or at least Open Metaverse GDP.

Although Web 3.0 was mentioned more than a decade ago, it is still not a clearly defined term. While there is no common definition yet, Web 3.0 has a number of features that set it apart.

• Open: The new Web is built from the ground up on open source software. This means anyone can participate in development, contribute, suggest changes and add new features. The entire development cycle is clearly seen with a level of transparency unheard of by companies that dominate Web 2.0.

• Trustless: Web 3.0 is a network that allows users to interact securely without revealing their identity. They can choose to interact privately or publicly. Instead of explicitly trusting one party, trust is now implicitly placed at all nodes holding the network.

• Unauthorized: In 2020, India turned off the internet access of millions of its citizens 109 times, despite the increase in demand triggered by the pandemic. Media outlets like The New York Times have been blocked for Chinese citizens, social media platforms tend to have critical accounts constantly censored. The new Web 3.0 is just the opposite. Anyone can participate without any permission from governing bodies or other traditional gatekeepers.

• Seamless Connection: This is where the semantic Web comes into play again. As part of Web 3.0, it can be seen as a more connected part of information, thanks to semantic metadata. Data can be accessed anywhere, anytime without relying on centralized cloud providers such as AWS or GCP.

• 3D Graphics: Three-dimensional designs in the Metaverse will create a more realistic, engaging cyber world that creates new business opportunities and can blur the lines between the real world and the digital world.

On this talk, it is a matter of curiosity what are the benefits of Web 3.0 and why we should care.

• Disintermediation: No need to pay data intermediaries like paying rent, no need to rely on “Big Tech” for our livelihood or even just our social life.

• Durability – Stability: Access to a truly decentralized Web 3.0 built on top of the blockchain cannot be blocked.

• Platform-Free Access: Everyone will have access to Web 3.0, regardless of gender, income and demographics. We will not need a government-issued ID to access Web 3.0 services. Your background in Web 3.0 can be thought of as our identity in the edge computing structure.

In general, Web 3.0 seems to solve many of the problems we encounter when interacting with Web 2.0 applications, which we cannot control, such as being a product of our time and data purchased even in free applications, and how our data will be used or what will happen to us. . Web 3.0. it is a more human-centered Web design that allows everyone to interact with others from all over the world with their local money.

For Web 3.0 to provide the above benefits, it must be built on truly decentralized distributed networks. Networks where everyone is equal and no player has the authority to block others or restrict their access to the service.

The Open Metaverse OS (The Open Metaverse OS)
The Open Metaverse Operating System (Open Metaverse OS) can be understood as an evolving collection of highly composable technologies. It aims to serve a larger global population in a variety of use cases and environments. In its current form, Open Metaverse OS allows to build bridges between world economies and other virtual economies inside and outside their own economies, including autonomous user identity and entities that do not pass in the real world, leaving the complexity of game engines, 3D modeling toolchains, and primarily centralized world created. focused on the critical substrates of the heaps.

MetaFi and its Exponential Entities

MetaFi is an all-encompassing term for protocols, products and/or services that enable complex financial interaction between non-tradable and tradable tokens (and their derivatives).

In today’s virtual worlds, there is a long queue of millions of creators waiting in line to participate in and monetize some work. This is expected to significantly reduce the time and cost of producing games, entire virtual worlds and economies. In doing so, we also see the use of a global workforce of millions of creators, allowing seamless and decentralized collaboration to span the GIG economy far beyond the capabilities of a single game studio, label or virtual platform.

It is anticipated that these activities will not only replace the real economy after a while, but also create a completely new wealth in the virtual space. While earning to play is nothing new, now ‘playing as a job’ is becoming mainstream, where playing, sharing or curating to earn and playing to earn money can become a form of financial liberation and primary income for hundreds of millions of people rather than digital feudalism.

Improving the service stack of Decentralized Autonomous Organizations (DAO’s), sharing risk with partners, developing financial instruments and gamifying finance and financializing everything explains the adoption of MetaFi in terms of four key trends.

Just as we couldn’t imagine what the business needs of today would be with the dawn of the Internet, we can’t yet imagine what the Metaverse will create. Can you imagine that in the 90s you were given some work related to the use and analysis of data? Or jobs related to digital marketing and virtual community management? No one could have imagined the jobs the internet would create.

However, if we try to imagine the professions that the Metaverse, which is the future of the Internet, powered by Virtual and Augmented Reality, combining the digital and real world, will create, we can see the ones that do not mean much to us at the moment, such as Digital Fashion Designer, Metahuman Doctor, Metaverse Tour Guide, Smart Contract Lawyer. It looks like we will encounter many professions.

The emergence of immersive digital worlds presents us with an unprecedented opportunity to rethink the relationship between people and property. Indeed, the idea of ​​property is woven into the fabric of modern society, thanks to capitalism. However, when you really think about it, we realize that ownership is a rather strange concept. While ownership is thought of as the right of a physical entity to use it as we wish, within the framework of the law, it makes intuitive sense in the offline world.

Overview of Crypto and NFTs

Like cryptocurrency, NFTs continue to take the world by storm. NFT (Non-Fungible Tokens) can be defined as digital files with a unique identity that is verified on the blockchain. Bitcoin, or any real currency in use, can be considered fully exchangeable (or “Fungible”), but NTFs are “non-fungible” because each NFT is somehow unique (at least in theory). In fact, NFTs can represent almost any type of real or intangible property, including artwork, music, videos, collectibles, trading cards, video game virtual items, and even real estate. In a nutshell, an NFT is a digital version of a certificate of authenticity that resides on the blockchain.

Metaverse describes a parallel virtual world where people play games, work, learn, socialize and live full lives through unique online identities, commonly known as avatars. As discussed, the Metaverse is first and foremost an economic system, a meta-economy that has supremacy over any digital economy, virtual world, or game if we want, and should be considered as a singular instance of the Metaverse or individual universe. Indeed, in a sufficiently long time horizon, it will also enjoy an advantage over command-based economies, as the combined GDP of this meta-economy exceeds that of nation-states.